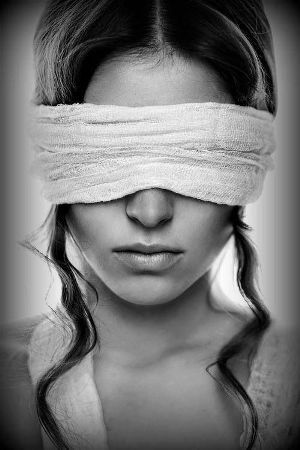 Blindfolded and in the Fire Zone of the Sociopath

Remember that game we played as kids? The one in which you were blindfolded, spun in circles five times and then set out in search for some hidden item or person? And the closer you got to that item, your friends would call out things like, “You’re getting warmer, warmer.” And once you stepped directly in the path of that item, your friends would scream, “You’re so hot, you’re on fire!” And you’d reach out and touch it, and the game would be over. You won!

“You are on fire. You’re so close! You’re in the fire zone of the sociopath!”

Don’t extend your reach because there is no winner, only losers when you invite a sociopath into your life. And please don’t think you can be the one to finally defeat or tame that beast. It’s a trick your mind (and the sociopath’s) are playing on you. He may seem fixed and cured, but that’s a facade, another mask, one of his three favorite masks:

The truth is he doesn’t really care if you stay or go. Don’t get me wrong. When he asks you not to leave, he means it. But he doesn’t want you to stay because he loves you so much. He’s just enjoyed controlling you. He sees his ability to control you as love. Love means control. Anyone and anything that he can successfully control 100%, he loves: his dog, his girlfriend, his workers, his illegal friends.

But the biggest reason he doesn’t want you to leave is because he can’t stand the whole “starting over” bit. Damn! Just when he thought he had you in the perfect place of control, you decide to leave. You know how much effort and “hiding” on his part went into getting you right where he thought he had you?

So he’ll cry like a big old baby if you suggest you want out of the relationship. He’ll promise to be better. He’ll promise never to do “that” again (whatever “that” may be). He’ll make you feel so dizzy from the wailing and crying that you’ll say, “Okay. I’m willing to try” just so your head will stop spinning. (Mind control. Believe it!)

And let’s say (hypothetically) that you do decide to stay. I suggest that you tell him the very next day that you changed your mind and you are serious this time and will be leaving him. Like the day before, he’ll wail and cry about. But this time, don’t give in. Don’t succumb to the toddler tactics.

This time, when you refuse to listen to the shame and blame of the 35+-year-old toddler before you, the most sinister thing will happen right before your eyes:

You will witness the moment you become dead to him. The black, glassed-over, gaze of his eyes upon you (or rather through you) tell the complete story. It’s dark and evil and totally empty. (This is your visual proof of the absence of attachment he feels for you or anything about you. You may have missed this, especially if the breakup occurred over the phone or through email. Dammit!)

If you do witness this or have witnessed it, never forget it and take it as the best and only proof you will ever receive regarding what he is and where his soul is.

He’s a sociopath whose soul belongs to the devil.

Accept it. Take off the blindfold. No need to reach out for proof that further contact will hurt you. You know intuitively that fire causes inevitable harm, and the closer you get, the worse the burn. Now it’s time to believe sociopaths are just as destructive. And the only way to stop a fire is to douse it, to kill it. Make the sociopath dead to you just like you’re dead to him. It’s not an easy feat. But it’s achievable. Trust me. 🙂