What if “50 Shades of Grey” was intended to be the very opposite of what society has embraced it to be? Let’s imagine.

The author of “50 Shades of Grey” was in the middle of reading the Twilight series (pre-teen vampire romance series) and thought:

”Oh, this type of thing REALLY happens and it happened to me. It’s not romance; it’s abuse. Vampires are real. They may not suck blood, but they suck the life out of those they prey upon and control. Maybe if I wrote a human version of the vampire character, people will see how ridiculous it is for us to romanticize this type of relationship.” 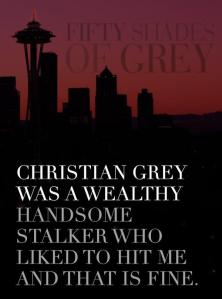 The book was published quickly as an e-book. Unfortunately, the book took off in a direction she never imagined. The book’s intended message was lost. People embraced it as a manual for better sex and improved relationships. It sold and sold and sold. A traditional publisher picked it up followed by an eager film production company. Instead of speaking out against the ignorant masses early, the author thought it best to sit back, collect her royalties and devise a plan.

While accumulating millions of dollars from the entertainment-hungry masses, the author made a wish-list of programs to create, programs and services traditionally not funded for victims and survivors of abuse:

1. Neuroscience and behavioral research studies focusing on the effects and varying classifications of PTSD during and in the aftermath of emotional, psychological, sexual, financial, and physical abuse.

2. Lobbying efforts to influence a change in the laws and penalties for non-stranger intimate partner rape and assault, child abuse, financial fraud, rape by fraud and a myriad of crimes associated with control and torture.

3. Education and awareness programs to assist and inform police officers, advocates, social workers and other service workers to clearly and effectively discern between perpetrator and victim.

4. A foundation dedicated to providing food, clothing, cars, money, hotel rooms and housing, counseling, integrative treatment options and support to victims and survivors and their families, children and friends.

5. Yearly conference of like-minded people and professionals interested in putting an end to the needless suffering of millions struck by abuse – emotional, psychological, financial, sexual and physical.

The book’s film version launched on Valentine’s Day 2015 (another intended irony in hopes of “awakening” those still asleep at the wheel).

On Monday morning, following the release, the author held a press conference revealing the book and film’s intended message. The book was rebranded and marketed as intended. Sales continued to rise and the wish list was made a reality.

…and we all lived happily ever after.