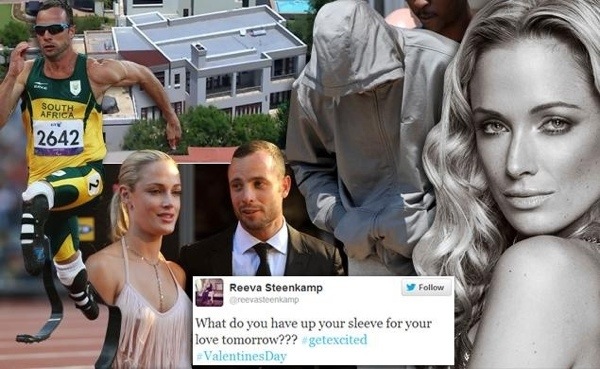 “I will not look at a picture where I’m tormented by what I saw and felt that night,” Oscar Pistorius testified after the prosecution projected an image of Reeva Steenkamp’s dead body to the court. “As I picked Reeva up, my fingers touched her head. I remember. I don’t have to look at a picture. I was there.”

If we are to believe Pistorius, we must believe that he was absolutely terrified that night and was only trying to protect Reeva. He was, according to him, acting and moving from a place of extreme fear and vulnerability. He was traumatized by the assumption that a burglar had gained access into his home. In his eyes, Oscar wants us to believe that he shot through that bathroom door because, in the moments leading up to the gun “accidentally” firing, Oscar was a victim of an intruder.

According to Pistorius, he was so terrified and traumatized by hearing sounds coming from the locked toilet stall that he blindly shot through the bathroom door at what he imagined was a burglar. Immediately after blindly shooting through the door, Pistorius then experienced a second trauma upon realizing – oh, my goodness! – that he had actually shot Reeva. Double trauma!

First, one does not immediately proclaim to himself and everyone within earshot, “I am a victim. I deserve justice.”

Is this how traumatized victims react in the moments and hours following such a traumatizing event? Do victims of traumatic events ask for help and ask to be cleaned up? No, they don’t.

As a society, we’ve seen plenty of footage and images of the aftermath of devastating traumatic events like 911 and the Boston Marathon bombing. With this collective understanding and knowledge, we can make a well-educated assumption that victims of trauma have no idea what just happened to them. Victims walk around dazed and confused, right? They move about in a state of shock and disbelief. Victims don’t recognize they’re injured. They don’t realize they’re bleeding or just lost an arm or a leg. They aren’t vomiting and retching. The last thing they notice is the smell of blood on their hands. They aren’t processing anything in the immediate aftermath. They are in shock!

When we experiences a traumatic event, our senses shut down. We actually become frozen from within. Although our physical body is experiencing a physical event, the rest of our body’s ability to function fails. We may be touching things, stepping on things, saying things, screaming things, being hit by things or even hitting things ourselves…none of these sensations are experienced consciously in the moment of being impacted by the traumatic event.

As a direct result of being temporarily disassociated from our sensations during a traumatic event, we have extreme difficulty remembering details of the event or how we specifically acted and reacted at the time of impact. Our behavior seems surreal to our memory, as if we were not present when the trauma event was happening.

A victim can suddenly and unexpectedly experience a trigger at any time or in any environment following the traumatic event. These sudden and unannounced triggers catapult victims into a hyper state of awareness and panic. On trigger impact, victims suddenly become fearful when no real danger is eminent and go back to their mental and emotional state of the traumatic event. A victim may begin to sweat profusely and grab at their necks as they gasp for breath. They may frantically attempt to escape a crowd of people or a room. They might aggressively push a plate of food from the table. They might stop talking mid-sentence or mid-conversation and go silent and freeze and gaze off into nothingness.

In the eyes of those witnessing these trigger responses, victims appear crazy and unstable. But neither could be further from the truth.

When a victim finally experiences a trigger, the victim is receiving cues about what really happened during the traumatic event. Getting in touch with the truth about what was experienced allows a victim to move toward balance – mentally, emotionally, spiritually and physically.

Triggers are our mind’s personal messages to us that we experienced something very real and very ugly and that it’s time to pay attention and accept it in order to move through it.

Once an individual understands the when, why and how behind triggers, the victim will finally realize he/she IS a victim. And once a victim realizes there is no shame in being a victim, the victim becomes a thriving survivor.

Only an individual who lacks a conscience and who lacks all accountability can immediately step away from a double-trauma (in which his actions resulted in devastation and death) feeling like the victim.

There is nothing Pistorius needs to move through. He is not experiencing triggers or trauma recall. In his own words he states that he was there and remembers, right? However, it is clear that Pistorius needs to get over himself, stop casting delusions and lies, and start telling the truth.

I imagine he doesn’t even take the anti-depressants prescribed to him. That his accounts of waking up to the smell of blood are real, but that he’s rather annoyed and inconvenienced by the memory of the putrid smell than triggered. That his crying and vomiting are only because he is mourning the life he once lived and not the woman he murdered.