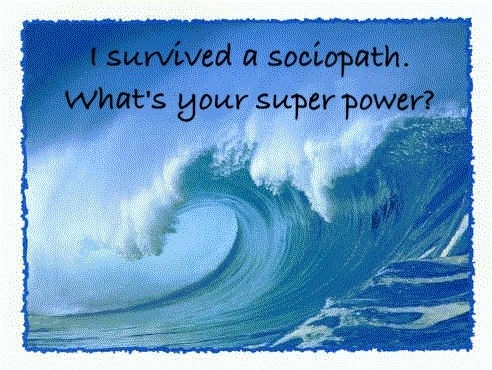 The behaviors of sociopaths, psychopaths and any pathological persons are not fascinating to me and should be collectively judged as bad by society. Why?

We judge everything. Judgement isn’t as bad as people are led to believe.

To me, indifference is the same thing as ignorance, and if we keep perpetuating ignorance about the real harm sociopaths, psychopaths and other pathological individuals are capable of inflicting, the problem just gets bigger and more difficult to manage.

So, I guess, I am not really judging anyone as being bad, am I? I am simply providing awareness based on facts and real-world experience.

The American Psychological Association will soon release the updated and revised 5th edition of the Diagnostic and Statistical Manual (DSM). The DSM is basically a glossary of labels and behaviors related to mental health. It’s a glorified dictionary, in my opinion, but a necessary one. The DSM-IV is what I used to determine, once and for all, if the boy in my story was a narcissistic sociopath. That’s where the usefulness of the DSM ended for me.

The DSM stops at the diagnosis, the definition and label. And even the label isn’t easily justified.

Where are the blood tests? What about the standards for reading brain scans of those diagnosed? Are their genetic markers that support whether or not a patient was born that way or nurtured and conditioned to be that way? Or did other societal factors cause the disorder?

And there isn’t much in terms of how to treat the disorders, either.

You laugh at the notion. So do I! We all know from experience that individuals who perpetually and instinctively repeat the behaviors characteristic of having a personality disorder or of being a sociopath or psychopath are, by their very nature, disordered and are not capable of change. Treatment for the personality disordered among us is a moot point.

To make matters worse for us lay persons (and for the inexperienced psychoanalysts and psychiatrists, for that matter), the DSM doesn’t even include a list of measurable effects that personality disordered behavior can have on non-disordered individuals and/or society.

And this is where the lines are blurred and the science behind psychiatry and neuroscience meet:

Therefore, why do we waste our time studying sociopaths like some newly discovered species of butterfly? The sociopath and the disordered have been around for centuries if not since the beginning of time. Why the fascination and investment?

They harm others. Period. End of story.

Who is going to have the guts to put personality disorders and pathology into a bucket outside of treatable mental health issues and disorders and classify these people instead as the cause of the majority of the harm inflicted upon others?

I don’t think I am alone on this one.

The following was pulled from an article published by The Guardian on Saturday, May 11, 2013: Psychiatrists under fire in mental health battle: British Psychological Society to launch attack on rival profession, casting doubt on biomedical model of mental illness

“There is no scientific evidence that psychiatric diagnoses such as schizophrenia and bipolar disorder are valid or useful, according to the leading body representing Britain’s clinical psychologists.”

“In a groundbreaking move that has already prompted a fierce backlash from psychiatrists, the British Psychological Society’s division of clinical psychology (DCP) will on Monday issue a statement declaring that, given the lack of evidence, it is time for a “paradigm shift” in how the issues of mental health are understood. The statement effectively casts doubt on psychiatry’s predominantly biomedical model of mental distress – the idea that people are suffering from illnesses that are treatable by doctors using drugs. The DCP said its decision to speak out “reflects fundamental concerns about the development, personal impact and core assumptions of the (diagnosis) systems”, used by psychiatry.”

“Dr. Lucy Johnstone, a consultant clinical psychologist who helped draw up the DCP’s statement, said it was unhelpful to see mental health issues as illnesses with biological causes.”

‘On the contrary, there is now overwhelming evidence that people break down as a result of a complex mix of social and psychological circumstances – bereavement and loss, poverty and discrimination, trauma and abuse,’ Johnstone said.”

Although Johnstone’s statement doesn’t specifically list “exposure to disordered people” as one of the circumstances behind another person’s breakdown, I can’t help not making that connection when I read trauma and abuse.

Bad people are born. People who are born bad hurt others. They inflict trauma and pain on others.

We have this false sense of hope that the bad people can be fixed with medication or a 30-day rehab stint. They can’t. Those born sick will stay sick.

Would you send a child born with Down’s syndrome to a hospital hoping upon the child’s return the child will be cured? Of course not. So why do we think people born with the propensity to inflict physical, emotional and spiritual harm on another can be fixed?

Gone should be the days of saying, “Oh, he can’t help it, he was born that way.” Or “His father beat him when he was young and that’s why he beats his wife and kids.”

We need to stop having pity on these disordered individuals. We need to stop dismissing rapists and child molesters and murderesses who claim childhood trauma and severe mental anguish as the reason behind their behavior.

There are many, many people who have been abused, molested and assaulted as children who do not grow into monsters who prey on others. Assuming such things is highly destructive and counter-productive to the healing and recovery process of victimized individuals born healthy and without pathology.

Society desperately wants to be fair and reasonable with offenders. Why? Because we know we are all fallible and make mistakes and would want mercy if we screwed up, right?

When healthy people screw up, we don’t weasel our way out of punishment. We say, “Yes, I did that. I am sorry. What is my punishment?”

We don’t blame our past or someone else for our bad decisions. We own our mistakes. We are accountable. We assume everyone is like us: good, fair and accountable.

People born without the capacity to empathize and who lack a conscience are not good, fair or accountable. They have nothing positive to contribute to society and have only the ability to destroy–people, families, institutions, organizations and governments.

(You could probably list a few. I could too.)

As a society and community of mindful thinkers and change agents, we need to stop focusing on fixing the unfixable and instead focus on helping those the unfixables have broken. Trauma patients can survive and they can be healed and society should want to help.

We need to stop putting our time and efforts and our money into research, drugs and facilities focused on understanding, medicating and housing the disordered and unfixable. How absurd!

All of those resources should be put into helping and healing the good people who can be fixed and who can be helped and whose temporary imbalance can be adjusted through mindful and natural approaches.

Stop blaming the trauma patients for their trauma and stop trying to help the disordered who inflict the trauma in the first place.

Trauma patients can be fixed. They can recover. But they can’t do it without our collective understanding and encouragement. They can’t do it if the source of their trauma is getting treated with more care, attention and fascination than they are.

Be fascinated with the people who walked away from the sick and disordered. There must be a super power in them that science has overlooked. I’d like to find out what that is and replicate it, wouldn’t you? A vaccine against the effects of pathology perhaps.

Prevention rather than the preservation of the sick and disordered due to society’s constant fascination. After all, when you pay attention to something, it never goes away.