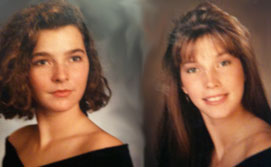 Senior portraits of my sister and me.

The unfortunate thing about dealing with mean people like narcissists and sociopaths, is that, as good people, our faith in human kindness makes it difficult to believe that mean people are mean deep down. But it’s a lesson we must realize sooner rather than later.

When I was 17, I got into a girl fight. It was New Year’s Eve 1989. I was a senior in high school. My sister was a junior in high school. I was the designated driver that night (like I was most nights) and attended a party at the home of friends who were already graduated from high school. (No adult supervision is the point I’m making.)

Sometime close to midnight, my sister walks into the party crying. It seems she and her friends had tried going to another party, but they were turned away because the girl who lived at the house where the other party was being held didn’t like her. (I’ll call the girl “Shayna” for lack of creativity.)

After my sister and her friends were denied entry, they turned to leave Shayna’s front porch. Shayna pushed my sister from behind and hit my sister over the head with her Coors Light bottle, knocking my sister off balance and sending her down the porch steps. My sister’s friends helped her to her feet and they all left a little stunned.* My sister, being the kind heart she is, decided to go find me, her big sister, to handle Shayna for her. (Thank you, sister.)

Nearing midnight, myself and a few of my friends pulled up in front of Shayna’s house. Knowing the laws of trespassing even at that young age (kids aren’t stupid), I asked a friend to go knock on the door and to let Shayna know I was there. She did. Shayna came out on the porch and yelled a few expletives at me. I let her finish her shouting. (If you had seen how angry she was flailing in her mini skirt and boots, you would have let her spew too.) Once her diatribe was complete, I had one question for her (which I asked standing approximately 10 yards away from her). I asked:

“Shayna, why do you hate me and my sister so much? What have we ever done to you?”

What does the asshole answer? Something I will NEVER forget. She shouts:

Well, most teenage girls would have gotten their feelings hurt by this. After all, Shayna had been the homecoming queen for a brief moment in time, she was pretty popular, was a cheerleader, and had once dated a football player. Her opinion mattered to a lot of people. But “a lot” of people didn’t include me.

I was raised by a mother who filled all four of her daughters with love and kindness every day. She told us we were beautiful and smart every single day. The opinion of this asshole wasn’t going to convince me that my mother was wrong.

Instead of continuing this ridiculous discussion, I threw my hands in the air and said,

“You’re right, Shayna. I am so very ugly. Now that we have that cleared up between us, maybe you will leave me and my sister alone.”

I chuckled under my breath and started walking to my car. Suddenly, I was struck on the side of my face by none other than Shayna’s cowardly brother. (I had dated the guy for like 10 seconds years before. I broke up with him because he wasn’t exactly the brightest crayon in the box. I guess he still held some resentment.) The blow threw me to the ground and into Shayna’s yard. I brought myself up onto my hands and knees. I looked up, and Shayna was coming after me like kids go after candy when the piñata bursts.

She kicks me (while I’m down), and I start rolling and crawling as fast as I can to the edge of her yard. She kicks me again. I roll into the chain-link fence. I try to get up, but my long hair is tangled in the fence. I am stuck. As I am pulling and pulling on my hair in hopes of ripping myself free, I look to my left and see Shayna bracing herself on the fence ready to kick me in the face. I can’t move. I close my eyes and anticipate the pain. It never arrives. I open my eyes, and Shayna is on the ground. Someone had knocked her down before she could annihilate my ugly face and make it even uglier.

I was immediately helped up and rushed away from the scene by a friend I will never forget.

Even though she gave me an answer as to why she hated me and my sister, I couldn’t accept that someone could hate another person so much for reasons that made no sense. Today, however, knowing what I know about narcissists and mean people, I have accepted her answer. Not because I think I’m ugly, but because I know some people will always choose hate over love and there is no explanation. It is what it is. I think we all know who the ugly one is. 🙂

*This detail of the assault was added to the original blog with permission from my sister, who believes she suffered a concussion and remembers little that happened afterwards.