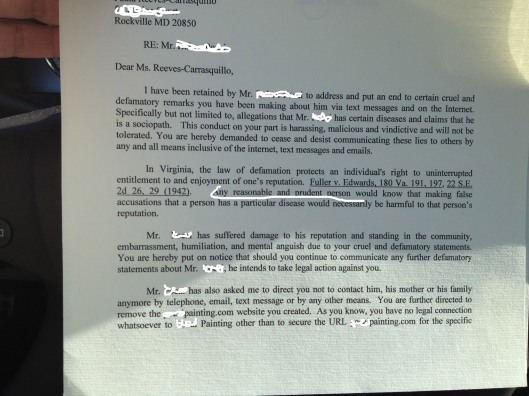 This is a little excerpt of the “Cease and Desist” letter (or should I say THREATENING letter) I received in February 2012 from the sociopath and his lawyer after trying in vain to get the sociopath to respond to my texts, calls and e-mails about information brought to my attention by a third-party that he had genital warts and is a carrier of HPV.

So, who caused this? Who pushed the issue with his lies, carelessness, and deceit? Certainly not me. I am REACTING to his poor behavior. The sociopath’s favorite description of my reaction has always been that I am tasteless. I operate “in bad taste.” So be it. If telling the truth is tasteless, I am guilty. I will wear the “Tasteless Badge” with honor.

Also, (even though I know the letter is filled with hyperbole and exaggerations) it’s nice knowing he got a taste of his own medicine and has “suffered embarrassment, humiliation and mental anguish.” Maybe there is such a thing as justice after all?

Thank you for this letter, Mr. Lawyer. It certainly opened my eyes to the power I actually have to “cause” such destruction (written with sarcasm). What a joke. Freedom of speech at it’s finest. All he had to do was pick up the phone and say, “Paula, nothing passed on to you about my sexual health is true” or “Yes, it’s true.” But only someone with something to hide would contact a lawyer. Agreed?

We live in a supposedly civil society, yet the ones who lack any civility are the first to use the very laws intended to protect us to hurt us. Such is the sad life of a sociopath. I do not recommend battling the sociopath because it takes a journey of many days, weeks, months (and in some cases, years) to get to the point of finding humor in his behavior. This letter cracks me up in its irony. But the cost of being tested diligently for the rest of my life isn’t ANYTHING to laugh about. I wonder what the health insurance companies think of this? I probably have a case.